Highlighting the 2020 Administrator of the Year 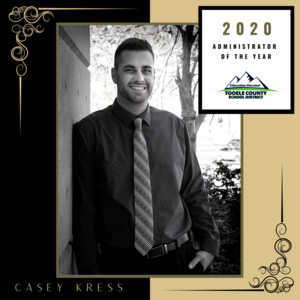 The 2020 Administrator of the Year is Child Nutrition Director, Casey Kress

Casey Kress strives to live by the motto, “collect moments, not things.” One of those moments is the gratitude he felt for being selected as the 2020 Administrator of the Year. Soon after the announcement was made, Kress thought of his team in the Child Nutrition Department.

“They are the true reason I received that award, each and every one of those employees,” said Kress.

Transportation Director Bryce Eardley nominated Kress for the Administrator of the Year award. He saw the amount of work Kress and his department had done during the school district’s soft closure in March 2020 due to the Covid-19 health pandemic and knew Kress had provided excellent leadership and guidance for his team.

“They knew it was absolutely essential that children still be served meals even though school was not being held as usual. They took it upon themselves to find a way to continue to provide breakfast and lunch for students every day of the week,” said Eardley. “Thousands of meals were handed out each week and it was an absolutely beautiful thing to watch.”

Eardley said Kress would never take any personal praise for the extra effort put in during the soft closure.

“A good leader never takes credit but gives it to those boots on the ground doing the front-line work. I’ve heard Casey praise the lunchroom workers many times for what they have done,” said Eardley. “I know he won’t claim any credit, but an army needs a good general, and the Child Nutrition staff absolutely have that in Casey Kress.”

School and Student Safety Director Jeff Wyatt has known Kress since they worked together at West Elementary School several years ago. He agreed the honor was well deserved.

“Casey wants to make sure that people have what they need and is more than willing to jump in and help with anything,” said Wyatt. “His personality is perfect for the position he has because he is so mellow and calm and doesn’t panic when there is a problem. He works through the issue to find a solution and makes sure things don’t get overlooked.”

“He can handle whatever occurs and rolls with the situation to solve it. He doesn’t need someone to keep an eye on him because his integrity and work ethic won’t allow him to not complete what he is asked to do.”

Eardley praised Kress’s ability to work well with others and always maintain a positive attitude.

“I can’t think of one time I’ve ever seen him grumpy, stern, or unwilling to help. He is always happy to give you his time and energy for anything you need,” said Eardley.

“Casey is easy to talk to and can get along with anyone. He actively listens to what people have to say instead of just pretending to listen. Every position that he has held, he has given 100% effort to do the best job possible,” said Wyatt.

One of the employees Kress directly supervises also spoke highly of his demeanor.

“He is so thoughtful and respectful of everyone he meets. He is a great leader who handles any crisis professionally. I’ve never met anyone who is as positive as he is,” said LeAnn Hammond, Child Nutrition Coordinator. “I cried when I found out he won this award. He is so deserving of it.”

Kress began working for the District in 2010 as a substitute teacher. He then worked for five years as a custodian at Copper Canyon Elementary. Since then he earned a bachelor’s degree in Business Administration and for the past two years, he has served as the Child Nutrition Director. He oversees 136 employees throughout the district ranging from office staff to school kitchen workers and their managers. He is currently working on a master’s degree in Business Administration from Western Governors University.

The thing he likes most about his job is providing “a vital service to students.”

“There is a lot of food insecurity in our county. Some do not know when their next meal will be. We get to provide two healthy meals each weekday to bridge that gap,” said Kress.

While he didn’t always foresee himself being in his current role, he has always had a love of public schools. His grandmother was a teacher and his grandfather was a principal and assistant superintendent. His mother was also an educator who worked as an English Language coach.

He attributes his success up to this point in his life to his wife Wendy and his family.